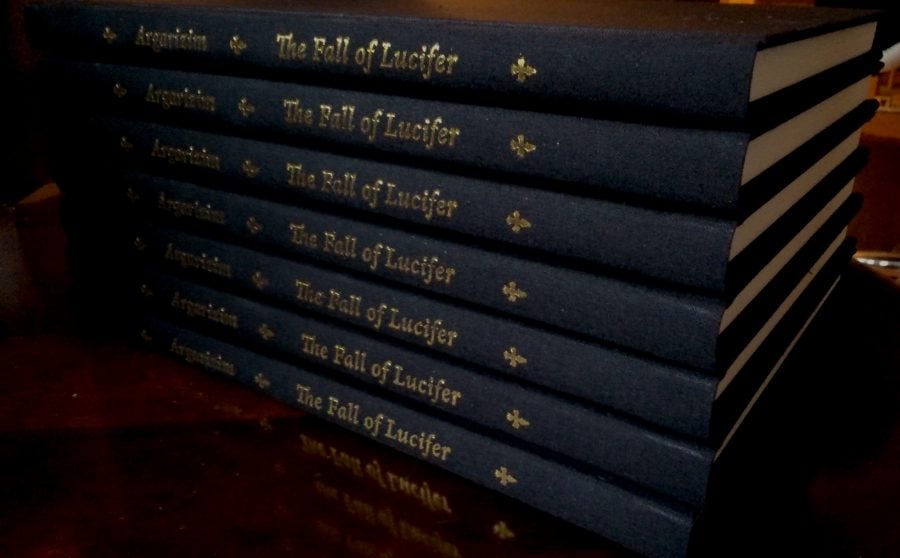 NOTE: THESE FINAL 2 COPIES HAVE SOME MINOR SCUFF MARKS ON FRONT AND REAR COVERS DUE TO BEING USED AS DISPLAY COPIES AT FESTIVALS. The books are otherwise in mint condition. Please send an e-mail to protogonosdistribution@gmail.com to request pictures if you wish. Now on sale for $65 due to the aesthetic blemishes.

Argarizim discloses a deep understanding of Luciferian gnosis, one that is not focused on carnality or egotism, but on the pursuit of true realization concerning the essence of Satan and the philosophy of the occult. This book focuses specifically on areas that are otherwise rarely treated in general LHP literature. The book concentrates, amongst other topics, on the influences of emotions as connected to aspects of Cardinal Sins within the advancement of the initiate, explaining the differences between Satanic paths and their progressive and regressive effects within a spiritual context. Dangers of the astral realms in connection to interactions with their denizens and the different states of the Spirit in the afterlife are also amongst the varied occult topics addressed, making this book most valuable for the students that have experienced the trials of the Mortification phase and that now reach for deeper and higher understanding concerning spiritual evolution as it is perceived within the author’s Brotherhood of the Star of Azazel.

The book consists of twelve chapters (each named after a certain stage of the descent into the Dantean Hell) plus prologue & epilogue. Regular edition.

*Photos and write-up used with permission from Viides Askel. Protogonos Distribution works within the North American sphere. Customers residing in the rest of the world are encouraged to order through Viides Askel.